Stay in touch, read about the latest events, update yourselves with SSCOBA which brings you all the news. 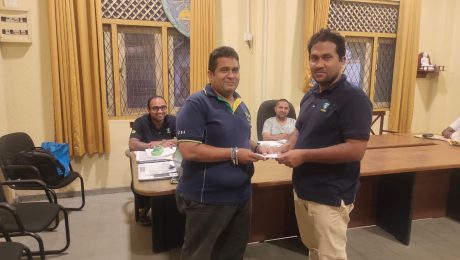 We would like to thank Sumangalian, Nadun Jayasekara for donating Rs 25,000/- to SSCOBA for the College Primary Section developments.

Tribute to P. P. Silva who developed cricket in Panadura in the 70s 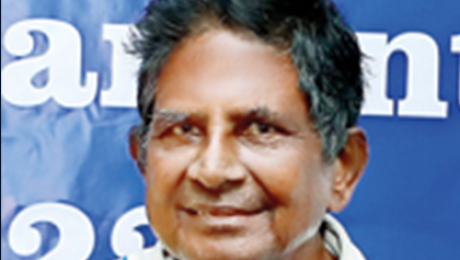 During the 1970s, the cricketers from Sri Sumangala College Panadura, were unable to join the Panadura Sports club and participate for the P. Saravanamuttu Trophy due to the lack of quality cricketers and the inadequate facilities for the sport to develop during that time.

Pinnaduwage Premadasa Silva who captained Sri Sumangala College in 1961 was keen to find a solution to this prolonged problem. Unfortunately he was unable to carry out his plans as he had to leave the College mid of the season as he was called upon to join the Royal Ceylon Air force. Anuruddha Sigera had led the team for the rest of the season.

After completing five years of service for the Air force, he joined Lake House. At that time he had worked during the night shift and saw that as an ideal opportunity to continue the development of cricket from where he left off five years ago.

So he joined Sri Sumangala College as an official coach on non-payment basis under the guidance of then master in charge Mr Maliyagoda.

At the time, the college did not have enough funds to spend for the development of the sport. Before joining the college as a coach Premadasa Silva had participated in coaching camps that was conducted by former England cricketer Frank Tyson.

Then he established an under 14 team as his long term plan under the captaincy of Anurath Abeyrathne who is a leading industrialist at present. The team also included players such as Tissa Illeperuma(Leading industrialist at present , Lionel Fernando(former National Cricketer) Jayantha Mendis , Susanga Soysa, Vijith Salgado, Thilak Mendis , Lakpal Samarasena, Dayasiri Silva, Rajiv Dias and Bandula Soysa were some of the players that were included in the squad.

The cricketing equipment were provided by late Mr Upali Dias. Premadasa Silva was influential in nurturing Tissa Illeperuma who is the first ever unofficial Test cricketer from Sri Sumangal a College Panadura . He toured Bangladesh under Bandula Warnapura’s captaincy and played all three Test matches.

In 1981 he was able to produce Raveen Wickramaratne who is the Vice president (Sri Lanka cricket) at yopresent) toured England as a school boy after Sri Lanka was awarded Test Status in 1982. Don Anurasiri is another cricketer who was groomed under Coach Premadasa . There after he went on to produce players which include Indika Gallage, Kithruwan Vithanage , Dilruwan Perera who went on to represent the National team.

The highest achievement of his career as a coach was, to witness his elder son Kaushal Silva’s entry in to the Test Team in 2011.

There was immense support from late Jayantha Weerasinghe(coach and commentator) and Sumith Samarasekara to develop cricketing infrastructure.

The Veteran coach had arranged an exhibition match with a combined team which including National players such as Roy Dias, Amal Silva and Anura Ranasinghe played against the Sri Sumangala College combined Xi sponsored by the late Sirill Senaratne.

Premadasa Silva was born in 1942 during a challenging period for then Ceylon due to the Second World War.

Premadasa Silva’s parents were Pinnawaduge William Silva (Father) Pedige Roselin Fernando (Mother). He is the third in the family of four sisters and a brother.

He has been working tirelessly for over five decades and he still continues to guide the next generation of cricketers through his cricket Academy in Panadura.

This is to pay our gratitude to a personality who has been a guiding light to the cricketers in Sri Sumangala College Panadura. To commemorate his invaluable service, the old boys of Sri Sumangala college has decided to have a pinkama on 30th December 2022 which is also his 80 birthday.

The pinkama will be held to bless him at the Galawetimodara temple at 8 am. To mark his 50th Anniversary as a cricket coach. 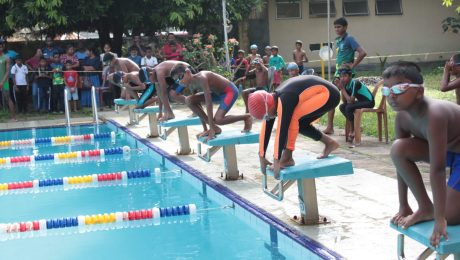 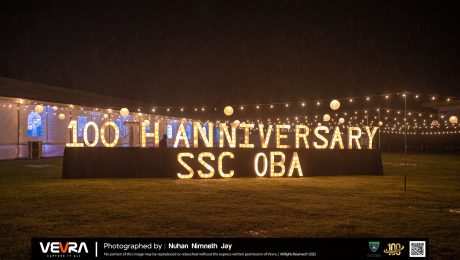 Master S. P. Sahan Madusanka is the proud winner of the T. Sarath Fernando Memorial award for 2022 for his outstanding results at the advanced level examination in 2021. The prize, a brand new laptop was awarded to the student at a function held at the college on 19th November 2022 with the participation of the family members of the late Mr. Sarath Fernando, the Principal Mr. Niluka Weerasinghe, the President of SSCOBA Mr. Aravinda Perera, Joint Secretaries and Treasurer of SSCOBA, and members of the Executive Committee. The family of the late Mr. Sarath Fernando and SSCOBA wish all the very best for the future of S. P. Sahan Madusanka.

The SSCOBA would like to thank Mr. Bingumal Thewarathanthri, the son of the late Mr. Sarath Fernando, who is the Chief Executive Officer of Standard Chartered Bank of Sri Lanka, and his family members for their continuous effort in awarding this prize annually.

Launch of a Commemorative Stamp and First Day Cover 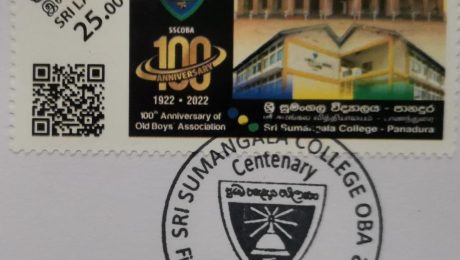 The Sri Lanka Philatelic Bureau of the Department of Posts issued a Commemorative Stamp and First Day Cover to mark the centenary celebrations of the Sri Sumangala College Old Boys’ Association, on 05th of November 2022 at the Centenary Celebrations held at College Old Grounds in Nalluruwa.

Senior officials of the Department of Post, Joint Secretaries of SSCOBA Mr Dhanuka Kottahachchi and Mr Amila Nawalage, and the Treasurer of the SSCOBA Mr Dinesh Ketipearachchi joined this memorable occasion.

Alms givings to inmates of children and elderly homes in Panadura 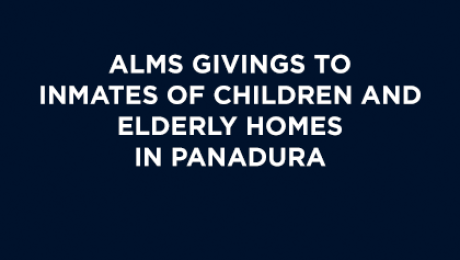 In order to mark the 100th Anniversary of the Old Boys’ Association of Sri Sumangala College, SSCOBA had arranged alms givings to inmates of below children and elderly homes in Panadura.

We would like to take this opportunity to thank each and every one who contributed in numerous ways to make this a success. 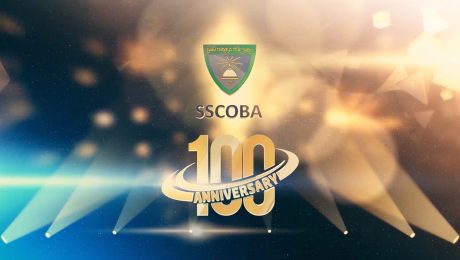 Meritorious act of Alms Giving for 100 monks organized by Sri Sumangala College Old Boys’ Association in lieu of its 100th anniversary was successfully held at the College Auditorium on Sunday, October 30, 2022, with the participation of maha sangha led by Ven. Prof. Kahapola Sugatharatana thero – the Chief Incumbent of Amarapura Chapter and the Chief Prelate of Rankoth Viharaya, Panadura.  The Principal, teachers, old boys, parents and students also took part in this event.

We would like to take this opportunity to thank each and everyone who contributed in numerous ways to make this meritorious act a success.