Sumangalian, Commodore Asanga Ranasuriya has been promoted to the rank of Rear Admiral recently 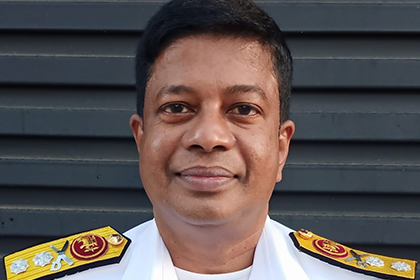 Born on 20 th October 1968 and educated at Sri Sumangala College, Panadura. He excelled in both studies and sports throughout his school career. He captained under thirteen and under fifteen cricket teams in school. He has held different appointments in college science, buddhist associations and a prominent active character whilst at school.

He did Sub Lieutenant Technical Course in Sri Lanka and specialized in Communication in India. He underwent training on advanced Electronic Warfare course in Pakistan. He successfully followed staff course in year 2005. He has visited Israel as a member of the crew for the acquisition of Fast Missile Vessel. He has visited Andaman Islands for get together of Navies and Coast Guard. He has followed anti piracy/anti terrorism programme in USA and followedSenior Command Course in China.

He has been awarded with “Ranasoora Padakkama” medal twice by the HE the president for his bravery acts in the face of enemy and other decorations bestowed to him include Uttama Sewa Padakkama, Sri Lanka Armed Service Long Service medal, Sri Lanka Navy 50th anniversary medal, 50 th anniversary independence medal, North &amp; East operations medal, Poorna Bhoomi medal and Riviresa operation campaign medal.

He married Dulmini in 1998 and blessed with a son and a daughter.