Happy Founders Day and 113th Anniversary to Sri Sumangala College and to all Sumangalians! 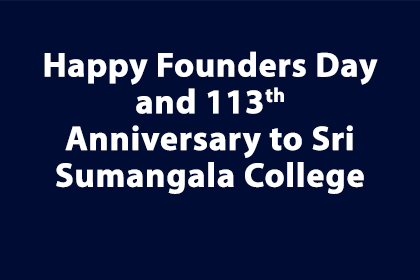 The late W. S. M. Wijenayaka (Village Headman of Pohaddaramulla, Wadduwa) was also a student with Walter and Richard Salgado, U. A. Jayasundare, and Sir Leo Fernando when Thomas E. Gunaratne was the Principal succeeded by W. Charles de Silva. His sons, Walter, Sylvester, Llewellyn, and Linton Wijenayaka were also students when A. C. Morawaka was the Head Master and A. J. Fernando who was the Principal, succeeded by K. L. V. Alagiyawanna.

The college is a National Institution – a part of our national heritage and it has a powerful Old Boys’ Association which was established in 1922.