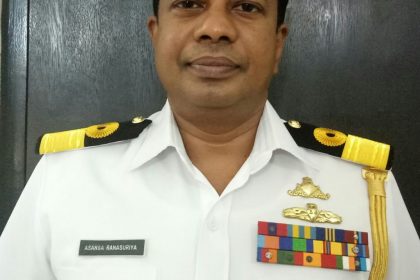 SSCOBA is extremely happy to inform that our distinguished old by Mr. Asanga Ranasuriya (RSP and Bar, USP, psc, MSc, BSc(DS) has been promoted to the rank of Commodore. He joined General Sir John Kotelawala Defense University as an Officer Cadet in 1989 and received his second year training at Naval & Maritime Academy, Trincomalee. Upon the completion of two successful years of training, he was commissioned as an Acting Sub Lieutenant in 1991. Subsequently, he was promoted to the ranks of Sub Lieutenant, Lieutenant, Lieutenant Commander, Commander, Captain, and Commodore. He is a graduate of General Sir John Kotelawala Defense University and obtained his Masters also from the same university.

He has successfully completed the Sub Lieutenant Technical Course in Sri Lanka and specialized in Communication in India. He underwent training on the Advanced Electronic Warfare course in Pakistan and successfully completed the staff course in 2005. He was a member of the crew who visited Israel for the acquisition of Fast Missile Vessel. He has taken part in a number of international seminars, workshops, get-togethers representing our motherland.

During his illustrious naval career which spans for more than 30 years, he has held a number of sea and ashore appointments where he performed them all in a highly successful manner. He has commanded Fast Attack Crafts, Passenger Ships, Fast Gun Boats, Offshore Petrol Vessels, Fast Missile Vessels namely P411, SLNS Hansaya, SLNS Weeraya, SLNS Jayasagara, and SLNS Suranimala. He held two appointments as an instructor at Naval & Maritime Academy and General Sir John Kotelawala Defense University. He has commanded naval base of SLNS Mahaweli, acted as Western Region Director of Sri Lanka Coast Guards and Commanding Officer of Coast Guard base SLCG Waruna. He performed duties as Naval Officer In Charge of Poonewa, and Commandant of Naval  Academy named SLNS Shiksha. At present, he is performing duties as Deputy Director of Naval Training at Naval Head Quarters. He will be taking over duties as Deputy Director General Coast Guard from 22nd April 2020.

He has been awarded ‘Ranashoora Padakkama‘ medal twice by the His Excellency the President for his bravery acts in the face of the enemy. Other decorations bestowed on him include Uttama Sewa Padakkama, Sri Lanka Armed Service Long Service Medal, Sri Lanka Navy 50th Anniversary Medal, 50th Anniversary of Independence Medal, North & East Operations Medal, Poorna Bhoomi Medal, and Riviresa Operation Campaign Medal.

SSCOBA takes this opportunity to congratulate Commodore Asanga Ranasuriya on his achievement and wish him all the very best in his future endeavors.