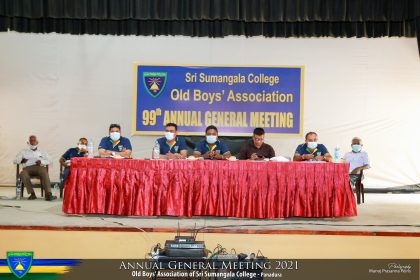 The 99th AGM of the SSCOBA was held successfully on 26th December 2021 from 0830hrs onwards at the college auditorium with a record number of attendance of old boys showing the growing interest of the OBA activities. This is considered to be a good sign for the future of OBA activities towards our Alma Mater. New office bearers were appointed for the year 2021/2022.

In his welcome speech, Mr. Mahesh Fonseka briefed members about the progress of the OBA, projects carried out in 2020/2021, and thanked everyone who supported OBA in numerous ways.

The Principal, Lt. Col. L. G. P. B. Liyanagaskumbura in his speech mentioned that how he wants to give priority to English Medium education. He briefed old boys on how he has utilized college infrastructure and resources.

A large number of distinguished old boys of various disciplines took part in the event and expressed their views constructively.

The vote of thanks was given by the Jt. Secretary, Mr. Amila Nawalage.